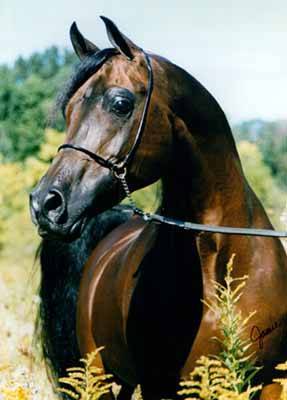 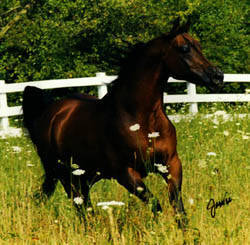 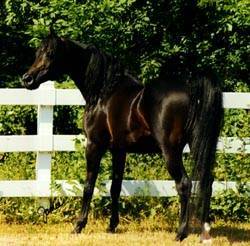 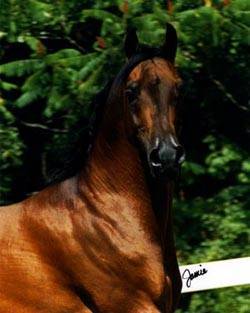 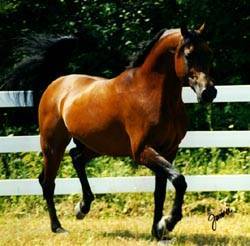 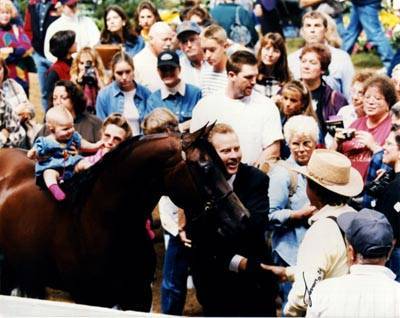 The three-time National winner Minotaur+ had earned enough show points to qualify for the Legion of Honor. He has also won over 20 most classic awards.

Under saddle, Minotaur+ showed exceptional athleticism. His balance, endurance and controlled power were awesome. Minotaur+'s get, when ridden, show similar ability to learn and be trained, always retaining a show attitude. His pedigree, confirmation and solid bone structure made him a natural as a race sire, and performance sire.

How Minotaur+ crosses with mares, he tends to lengthen the croup and shorten the back. He emphasized pretty, shortening and widening the head and passing on the large soft eyes. His legs were die straight with good bone and he had excellent depth of chest. His motion, show ring attitude and tail carriage are shared by his foals, as is his ability to come right down and be a pleasure to deal with even in the breeding season.

*Menes was purchased from Russia for $3,000,000 in 1985 and brought to Aries Arabians, north of Chicago. He was raced successfully in Russia prior to his importation. *Menes' son, Balaton, himself a European Champion and bred almost identically to Minotaur+, was called "the race horse of the century" by Tersk Stud. *Menes dominated European shows in 1994 and, most recently, has sired Emperator, the 1990 U.S. Champion Futurity Colt and as well was named World Champion Stallion. Amurath Selari is the daughter of *Ramses Fayek, who has sired a U.S. National Champion and has numerous National Top Ten horses. Her dam, *Sanacht, is the all-time leading dam of champions.